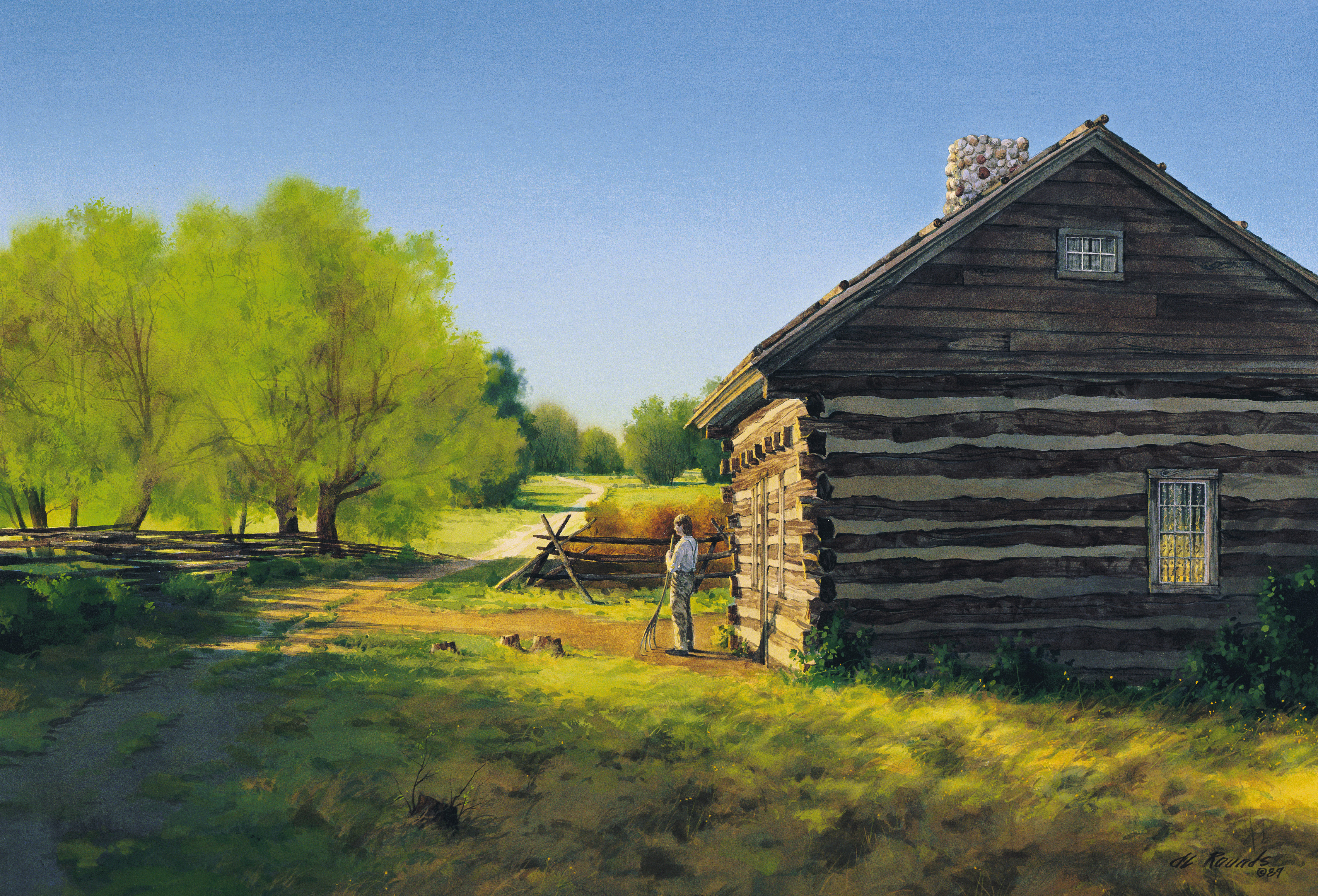 Sometime in 1988, I was awakened from a very interesting and detailed dream. It seemed very real, like I was actually there. I got up and went downstairs into my studio and did a little sketch of the dream because I was afraid that I would forget what I had seen.

In the dream I was standing very close to the edge of a log cabin. You could tell that it was a new structure because you could see the bark that was clinging on the logs and the roughness of a newly built log cabin. Standing out in front of where the front door would have been a young boy was standing, holding a pitchfork, kind of staring off into the distance, seriously contemplating something. In the dream I could perceive his thoughts. He was thinking about what had just happened to him, going over all of the details of the last day or so. I became aware that this was the 14-year old Joseph Smith the day after the First Vision.

I started looking around and observing the scene. I noticed that he had a slight build. I was surprised by the length of his hair. I noticed that in the foreground there were cut off stumps from smaller trees and things were a little rough everywhere. I could tell that the trees were just starting to break out and bloom. It was very early spring. All those things were just short glimpses of the scene, but for some reason I kept focusing on the pitchfork that he was holding.

As the days went by, I thought about all I had seen in the dream and how I might be able to do a painting. I realized that there was a lot of information that I didn’t understand and I needed to get all of the facts straight so that I could move forward with a painting. I was perplexed by the log cabin. I hadn’t had much experience with the Smith family farm, but I knew a little bit, and at that time I thought there was no log cabin. I knew about the white house that Alvin had built.

I called Don Enders at the Museum of Church History and Art and told him about my dream. He invited me to show him my drawing. In return, Don showed me some drawings of a log cabin that they had just excavated, the site of the Smith family log cabin, where they lived at the time Joseph went to the grove. I had no prior knowledge of the log cabin. I presumed Joseph had gone to the grove from the white farmhouse that Alvin had built. When Don showed me the early sketches of what they felt like it was going to look like, I was surprised at how similar my dream was to Don’s sketches. I asked Don about the pitchfork. I wasn’t even sure if they had pitchforks in that time period and he assured me that they did. He showed me drawings of early pitchforks of that time period and what they would have looked like.

As I moved forward with the painting, I built a model of the log cabin. I went out on location to find a similar sight that fit what I could see in my mind. I did further study on the clothes. I even got my question answered about Joseph’s hair, which was typical for the time period.

As I got going on the painting, I kept thinking about the pitchfork and why it seemed so important to me. I didn’t get a clear answer and I just kept working on the painting. When I had almost finished the painting, the thought came to my mind about “after much contemplation” and how important that was. I suddenly realized what the pitchfork meant. Joseph had just had this incredible spiritual experience happen and he was thinking through it. At that point perhaps his father came and handed him a pitchfork and said, “Go clean the manure out of the barn.” Joseph was thinking that everything would be different from now on, that everything would change. And yet he was still having to do his chores and it seemed like really nothing had changed. Everything had changed, but nothing had changed.

It occurred to me how similar that is to my own spiritual experiences. I’ll have something happen to me and I work through a process to get answers to questions and feel very comfortable about a decision that I’ve made or something that has happened to me. I feel a clear confirmation of the Spirit. And then the strong feelings lessen and everything feels like before. Everything has changed, and yet nothing has changed. Even for Joseph Smith, with all that he experienced, he had that very same thing happen to him. After much contemplation, the Lord expects us, on our own, to work through things. We have to trust in Him and yet do our part. He doesn’t leave us, but there is a period of work involved to come to understand all the things that he has taught us. We need to balance spiritual experiences and insights with the demands of work and working through the questions of life.