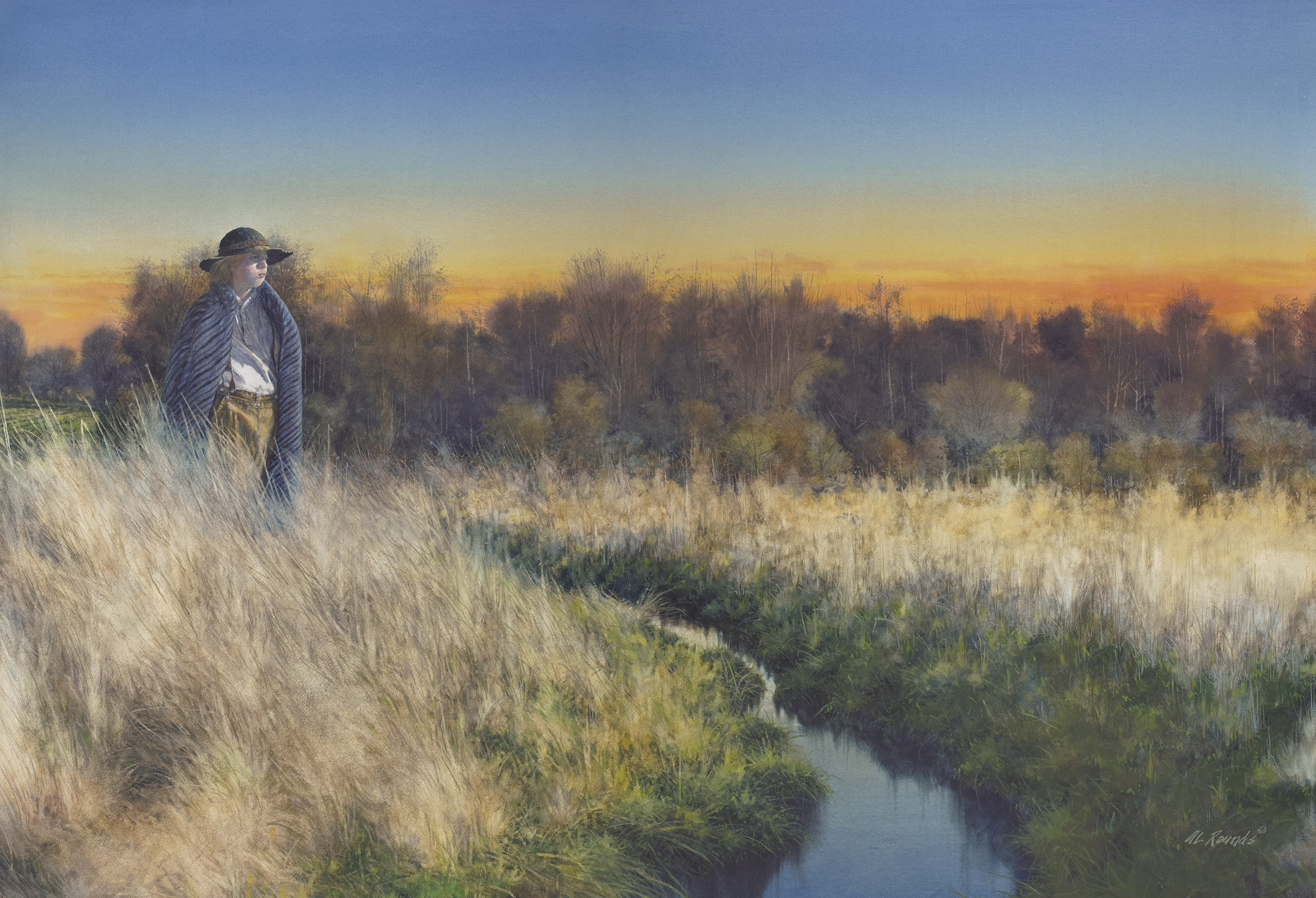 “In October 2019, President Russell M. Nelson challenged all members of the Church to think about what they could do to celebrate the 200th anniversary of the Restoration of The Church of Jesus Christ of Latter-Day Saints and in particular, Joseph Smith’s visit to the grove. I turned to my wife and said that what I felt I needed to do was to complete the two paintings that I had planned for the Sacred Grove and a view from up on Hill Cumorah looking back towards the Manchester Farm. I knew I needed to get busy to get those paintings done by the next conference, so I started meeting with Don Enders from the Church History Museum. Don is the expert authority on Palmyra and the Sacred Grove and that whole area. He and I met several times trying to get all of the information I could for a painting of the Sacred Grove and the original farm homestead. I wanted it to be accurate—I wanted it to be a painting of what it looked like when Joseph went to the grove.”

“I was working on getting everything together, then I ended up having an unexpected surgery, so I postponed my trip for a few weeks and then COVID hit. I was incredibly disappointed that I couldn’t go and do my usual tromping around and investigating to try to find the paintings.”

“I got busy with another painting, but hadn’t forgotten about President Nelson’s challenge.”

“Sometime in July I was awakened after having a wonderful dream. In this dream, I saw the 14-year old Joseph Smith standing on a grassy knoll looking towards the sunrise and a bank of trees in the distance. He was standing on that knoll contemplating. He was on his way to the grove. He had just stopped and was standing still. He had a blanket around his shoulders. The blanket wasn’t a quilt, but it had a lot of colors, mainly blues and reds. I could see that his shirt was too big for him. I could see that his pants were too big for him. I could see his suspenders. I was able to get a very good view of what he looked like. I started noticing all sorts of things. He had a big floppy hat that was shadowing most of his face. The way he was standing was very much like how a 14-year old would stand. Teenage boys don’t necessarily have great posture, just a casual stance. His hair was longer than I would have expected. I didn’t perceive any of his thoughts. He was just contemplating and looking out towards the grove. As I looked away from him, I spanned the scene, looking from the left to where Joseph was, over to the right, and I could see a grove of trees with the sun just coming up.”

“When I woke up from the dream, I woke my wife up. I told her about this wonderful dream and how I needed to get right on this painting. I was in the middle of another painting at the time, so I was really anxious to get to it, but I needed to finish my current painting first. But I did some drawings of Joseph’s face, what I saw in the dream, to try to lock it in my mind. Many months later everything is still very, very vivid from what I saw in my dream. After I told my wife about the dream I thought to myself, “the boy Joseph looks a lot like my grandson” so I decided I had found my model. I rented some clothes from This is the Place Heritage Park. I picked out period clothes that looked like the clothes that were in in my dream. The pants had a handsewn look and were held up by suspenders. The shirt did not have a collar, just a button and split at the top. I took my very willing grandson and posed him out in a field not too far from my home.”

“I started again to plan a trip to New York and the Sacred Grove, but COVID was still restricting travel. One day while in my studio, I was contemplating what I should do when I came across some slides of the Sacred Grove that I took probably 40 years ago. In those slides was a picture I had taken from the front porch of the Alvin Smith home, the big white house, but I was standing on the front porch looking over towards the grove at sunrise. That gave me the colors of the sky. I found a few other slides from that same trip that I had taken of grassy areas and of the little streams that run through the fields there. Miraculously I found all the information that I needed from slides that I had taken so many years ago! When I got started on the painting, I had everything that I needed without the trip to New York.”

“My biggest struggle with the painting was to try to duplicate the visual picture that came from my dream, especially Joseph. It was so challenging not to just paint my grandson as Joseph. With watercolors there are not too many things you can do to change a painting. Often times you get only one shot. You can’t back up and make corrections, so I would say this was probably the most challenging painting that I’ve done in my entire career.”

“I am very happy about how the finished painting feels and looks, and my overall success of putting down on paper what I saw in my dream of a young man pausing, wondering if this is the right thing to do.”

“We have entitled the painting “Inquirer After Truth,” borrowing the phrase from Joseph Smith’s History (1:1). That’s what Joseph was and the feeling and message I want to portray by the painting.”