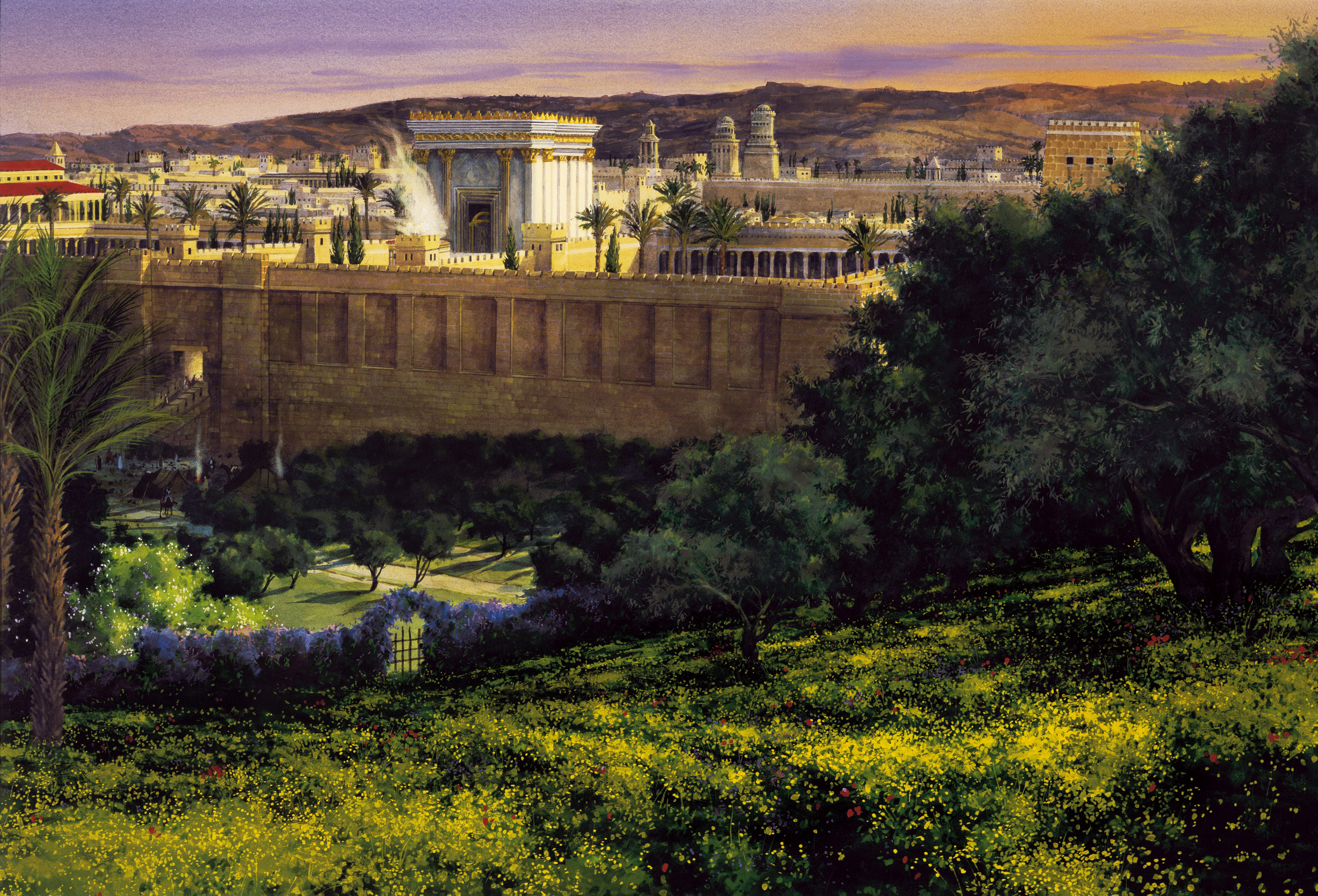 “This is a painting that I did many years ago with the help of a lot of great historians, including Truman and Ann Madsen, Dann W. Hone, and Kelly Ogden. I actually spent a full year studying and preparing for this painting. I wanted to do a painting of Jerusalem that spoke to many different types of religions, not just the LDS way of looking at things.”

“When I arrived in Jerusalem I was going all around trying to find the painting that felt right to me, but every sight that I went to I couldn’t see anything in my head and it was starting to drive me crazy. It was starting to drive everyone else crazy as well because I was starting to get nervous because if I don’t get these images in my head for a painting, then what am I doing here? I would go to the sights and everyone would say “Don’t you feel all these great things?” and I would be silent and inside would say “No, I don’t feel anything” and it was really frustrating to me.”

“One night I was sitting at the Jerusalem Center. I actually had snuck into the amphitheater and it was dark, so I supposed I wasn’t supposed to be there. But I sat down in the middle and looked out at the beautiful city that you can see from the amphitheater in the Jerusalem Center and someone came in the upper door and sat down at the organ and started playing. I slumped down in my chair because I wasn’t supposed to be there, but the lights didn’t come on. Somebody was just playing this beautiful music. As I was sitting there looking out at the city, this painting came into my head. The gentleman that was playing the organ turned out to be Robert Cundick, who was on a mission and was there practicing in the dark. But when the music came I was able to see in my head this painting.”

“Then I went out and started gathering all of the information that I needed to finish this piece. The painting is of the Garden of Gethsemane and what the Savior would have seen the afternoon of the Atonement, so the Atonement has not taken place yet. Truman taught me that the garden was a real garden and not just olive trees. There would have been date palm and fruit trees. I’ve got a blooming apricot tree here in the springtime and spices blooming.”

“The other interesting thing is that we see the gate and know that it was a gated garden. Everything on the inside of the gate would have been natural and not cut down by the sheep. The shepherds have the right to move the sheep and keep them moving so they don’t destroy the land. So everything on the outside of a gated wall was their dinner, but if it was a gated garden then they could not come inside. Everything on the inside would have been knee high and natural. In my painting I have a blooming mustard seed and there is a date palm on the left side of the painting.”

“This is a view looking over to the gate that the soldiers came out of and would have walked up to the Savior. You can also see that there are strangers in town. Everyone was there for the Passover and everyone was on the outside of the gate selling their wares of the things they needed for the Passover.”

“You can also see the area where the courtyard is where the Savior was flogged along with the area where He chased the money changers out.  And the main building shown was the Temple, which was the reason why He was crucified because He referred to it as ‘My Father’s House.’”