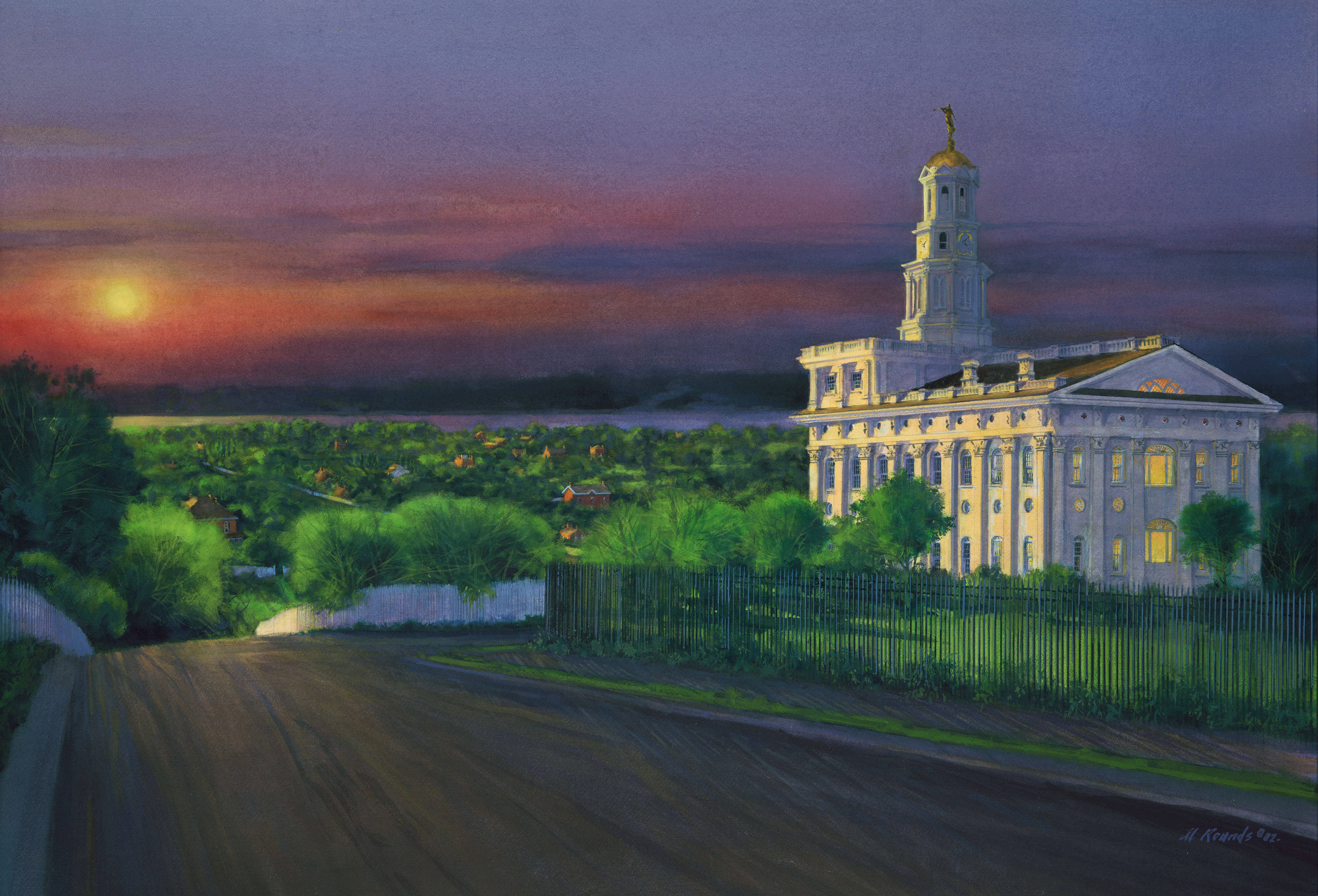 “In the summer of 2000, I embarked on the Church history trip of a lifetime with two of my dearest friends, Rob from Scotland and David from Great Britain. I like to say they are “brothers from another mother.” We had so many fun and spiritual adventures on this trip that it is hard for me to know where to start and which story to tell first. I do need to admit that I tried to stay quiet most of the time because I found that their accents got us into places that most people don’t get access to.”

“On one particular day when we were in Nauvoo, we were granted just this kind of tour. The Nauvoo Temple construction was just beginning and the foundation was about 6 feet out of the ground. We were able to get on top of the foundation and get a good look of everything.”

“As I was standing on the foundation, looking West towards the flats, which is a much lower elevation than where the temple is, I actually couldn’t see beyond the west end of the temple because of the treelines and everything that was there, but I knew what was on the other side of those trees and a painting of the Nauvoo Temple came into my mind. I grabbed a pencil and I was trying to find something that I could put my sketch on, but all I could find was this card that I had in my pocket (see below), so I clumsily did this little sketch of my idea for the Nauvoo Temple.” 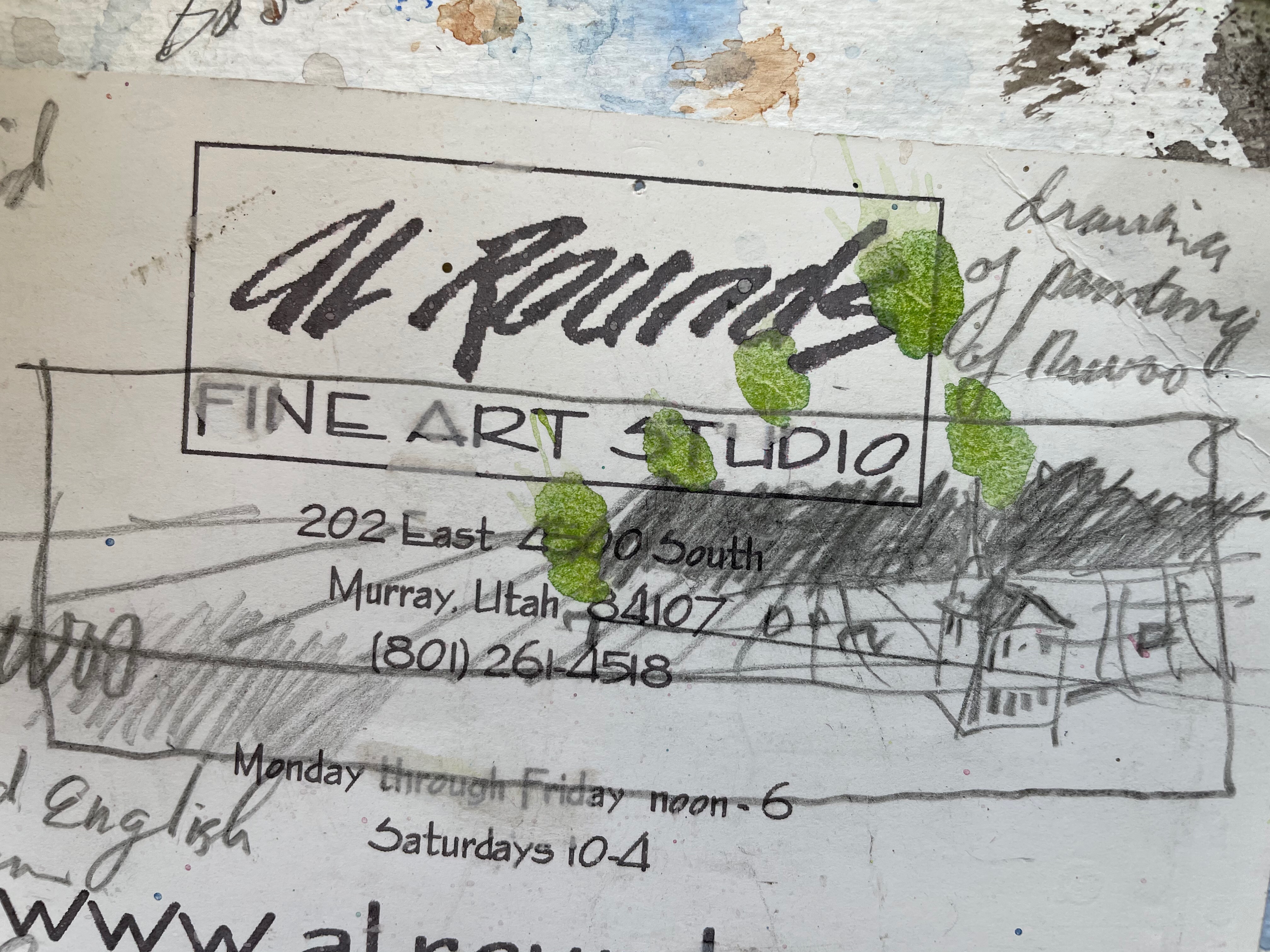 “In my many previous trips to Nauvoo, I had studied the temple very carefully and had lots of photographs of the model of the Nauvoo Temple. So I had a pretty good idea of what the outside looked like, but it was hard because the video cam was just showing cement walls with the openings for the windows. I was literally painting the temple waiting for things to be completed far enough so that I could work on the details of the painting.”

“As the temple was nearing completion and I was nearing the completion of my painting, one of the very last things to go on the temple was Angel Moroni. I worked out two different versions in my drawings—one of the original weathervane Angel Moroni and the other with the standing Angel Moroni. It wasn’t until the decision was made for the Angel Moroni to be placed facing west that I got the angle. I decided to present the temple with both a “now and then” sort of feeling, with what the temple looked like then and how it would have felt up on the hill looking down on the flats, and with the today’s Angel Moroni on it. I changed the gate and the fencing somewhat to depict an earlier time period instead of what’s there now, but in my opinion the temple is a monument to Joseph and to the craftsmanship of those that have worked on it now.”

“Later in 2002, while I was living in Nauvoo, I was spending much time with Charles Allen, who became another dear friend. Charles gave me a lot of information about the windows, how important they were, and the process he went through to discover exactly what the east side of the temple looked like. One of the things he taught me was that Joseph challenged William Weeks, the temple architect, because William didn’t want the round windows in the temple because it would make it too tall for the architectural rules of the time period. Joseph told William that he would have his round windows because, ‘I have seen the temple illuminated.’”

So many times I have sat outside the temple seeing it illuminated and admiring the majesty of the temple and the beauty of the Nauvoo valley. I decided to entitle the painting “Nauvoo the Beautiful,” but it really has a subtitle to it and that is ‘The Beautiful Gift to Joseph.’”