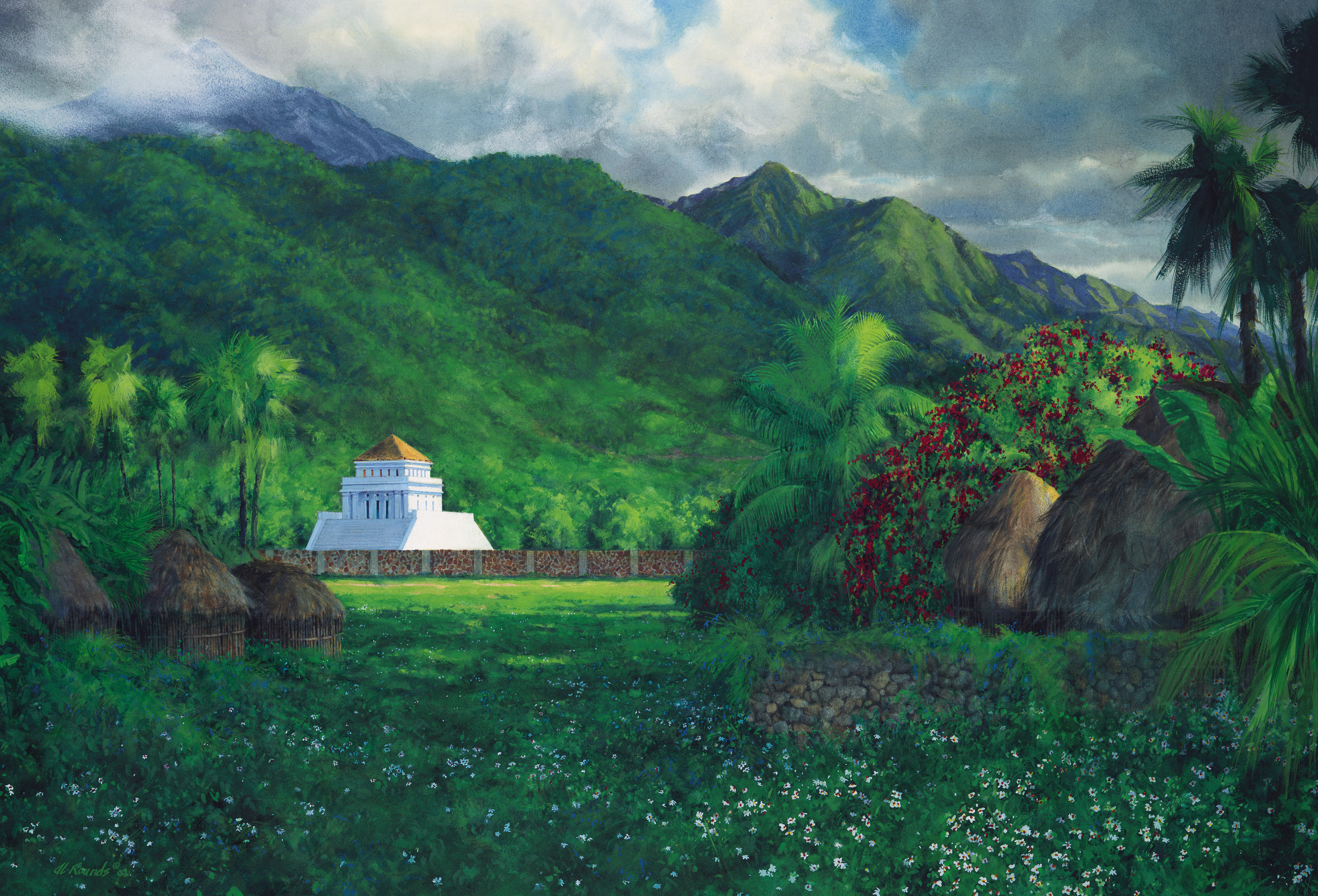 “This painting of “Nephi’s Temple” was completed in 2002, but prior to that time period I met with John Sorenson at Brigham Young University’s Ancient Studies. He talked to me about the type of structure the temple would have been. Based on the scriptures we know the size of the temple because it was crafted after Solomon’s Temple, but the materials were not as nice because they were not to be found. Dr. Sorenson and I also discussed the living conditions of the Nephites at that time period, including the type of dwellings that they would have lived in and the surroundings of the area.”

“At first my trip was going to take us to Guatemala, which was where Dr. Sorenson felt like most of those things took place during that time period. Although I didn’t personally agree with his findings about that, I scheduled a trip to Guatemala to find the type of location and mountainous terrain and materials that would have been similar to his descriptions from the research that he had done.”

“I recruited by brother-in-law, Kelly Beck, to go with me. He served a mission in that area and spoke not only Spanish fluently, but had a pretty good grasp of the Myan language. Turned out that we were not able to go to Guatemala because of a cholera epidemic, but we ended up going to the Yucatan Peninsula under Dr. Sorenson’s advice. Kelly and I got there and rented a car and just took off. We drove through back country jungles and went to the most crazy places searching out ruins and areas with the Myan people. They basically lived in the same living conditions now that took place at that time period of Nephi’s Temple. We were able to go into the home of a Myan family and observe the cleanliness, but also the very rudimentary, crude structure that was built with a wood and dirt floor and grass roof. We were able to see their animals and how they set up their villages. It was absolutely fascinating. We visited several ruins trying to get a feeling of structures.”

“In my painting I combined the aspects of my personal feelings and the research of Dr. Sorenson. I based the temple in the painting more on my research on Solomon’s Temple in Jerusalem than the type of ruins that we found in the Yucatan Peninsula. The Temple would have been built out of the nicest materials that they had access to in a very new community because they literally built their homes to get shelter and then built the temple. It would have had a wood roof, or perhaps made of grass, but it would have had a stone structure. There also was a wall around the temple.”

“Dr. Sorenson gave me a lot of slides from the Guatemala terrain with the volcanoes in the distance, so I was able to base the terrain off of both the Yucatan Peninsula and Guatemala.The terrain and foliage and trees of things were very typical of what I saw in the Yucatan. The flowers and things that are portrayed are from that location. So all of these things are kind of my ideas and knowledge of Solomon’s Temple in Jerusalem combined with Dr. Sorenson’s research.”