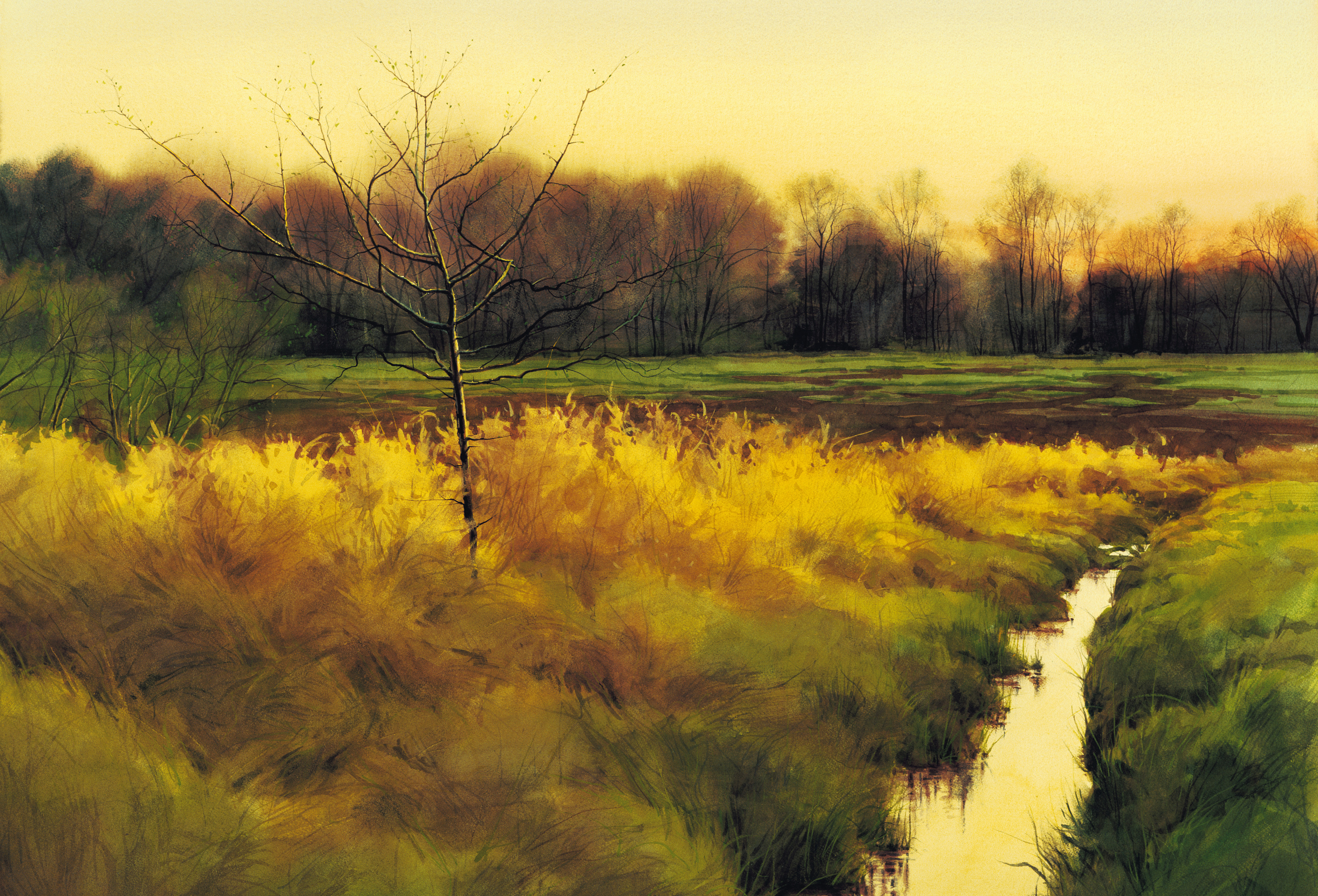 “About 30 years ago a curiosity began to develop in me about the events that transpired in the Sacred Grove with Joseph Smith. After I had researched out all that I could get out on my own, I went and met with several Church historians. In particular Don Enders and tried to pick his brain on what he knew about the the time of year and exactly when Joseph went into the Sacred Grove. It was then that I decided that I needed to go to the Sacred Grove and spend some real time there during the time period that Joseph went into the grove in order to be able to paint it correctly. I didn’t really know how I was going to approach it or what I was going to do, whether I was going to paint Joseph in the grove or just the grove. My mind was completely open as to what I was going to do.

“So I headed out to New York and got there the last week of March and was there through the first week of April. I basically camped out at the area and spent every morning and evening there hiking all over the grounds to get different angles of the grove. I was there long enough that I could observe the wildlife, such as deer and fowls, and get to know the kind of creatures that would have been in the grove that morning that Joseph went there.

“To my surprise, and it really was a surprise, I was just absolutely frozen the entire time I was there. It was bitter cold and the time period that I was there it was clear. It was never stormy. I could never get warm; it was cold the whole time I was there. Especially in the mornings and as the sun went down. I was shocked to observe that there were no leaves on the trees. They hadn’t even started to bud yet.

“My trip to the Sacred Grove taught me a lot of things about the grove. One was that there was a lot of foliage on the ground. It was very noisy walking through a grove of trees in that area because of the amount of debris that was on the ground. And even though the area is quite wet because of the amount of creeks and streams everywhere, the ground was quite frozen. You can’t walk through a grove and be quiet. And again I was pretty surprised that there were no leaves on the trees. I was able to surmise by my experience that Joseph definitely would have had a coat on, or perhaps a blanket. It was very common for people of that time period to go anywhere and have a blanket around them. He definitely would have been covered up, no short sleeves.

“Also, it was a real symbolic time of a new beginning. By the time I left the leaves on some of the trees were just starting to break. So as I left I definitely decided that I wanted to be Joseph the observer walking out to the grove, not a painting of him. But make it look as it would have looked as he walked out to the grove. And that’s how I made this painting. You can see an area in the painting where the fields are turned where they had been working the day before, but he’s on his way out to the grove in the early morning.

“There is kind of a funny story. After I finished the painting I took it into the Ensign Magazine for them to photograph it since that’s what I always did when I did something that had anything to do with Church history. And I remember showing it to the editor of the Ensign at that time and he looked and it and said, “That’s not the Sacred Grove. That’s not how we know the Sacred Grove.”

“I kept saying, “Yes, I know.” But I grew up thinking of the Sacred Grove with the green and light filtering in through the trees and those sort of things, so I understood what the editor was saying. And they didn’t use that painting for several years since it was a shock and such a different way of looking at Joseph’s experience in the Sacred Grove.

“Lastly, Cynthia, my wife, asked me once what painting brought me the most sense of peace and I would have to say that it’s always been the “Sacred Grove” because we all need our own Sacred Grove. We all have that need some time or another.”