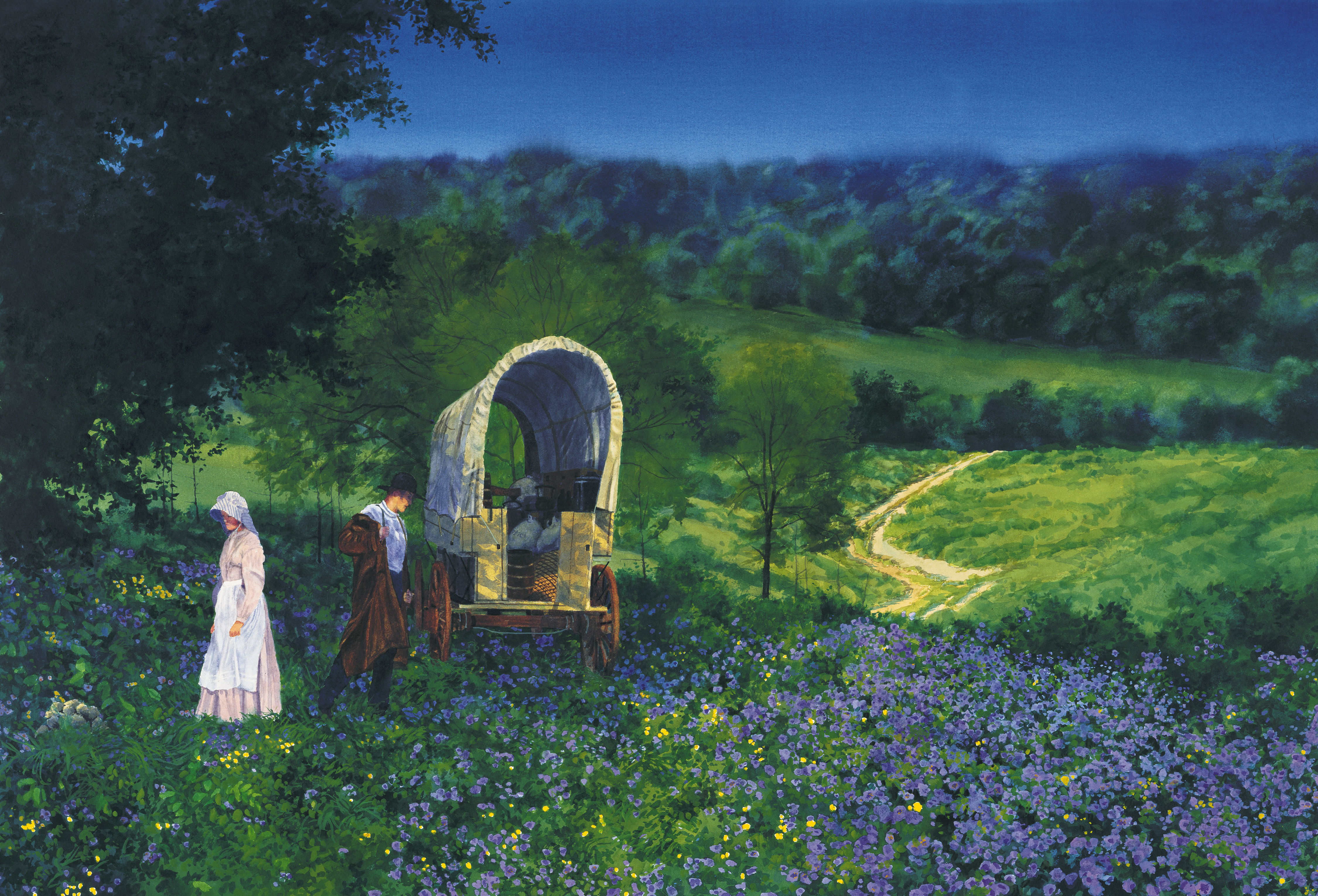 “Several years ago, a friend and client came to me with an idea. He owned some property in Missouri that included a portion of the Mormon Trail and a child pioneer grave site. He really wanted me to do a painting of the site, and would give me full leeway to do whatever I wanted. I agreed and we flew there together in the winter so I could get the clearest view of the terrain. We had a wonderful time traversing the area and I was very excited to get home and get going on the painting.”
“We met on several occasions to work out the details, like deciding what time of year the painting should be. I did drawings of my composition plans and showed him my slides, so I was quite confident that he could see in his mind what I could see in my head—what the painting would ultimately look like. On completion of the painting, I was very excited to show him the finished work. To my great surprise, he said he did not like the painting at all. I told him that he did not need to buy it (and could not buy it) because it was very important to me that he had a painting that spoke to him.”
“I took the painting to my gallery and displayed it there. As I looked at the piece for a week or so, I kept trying to understand why the painting was such a surprise to him, presumably so different from what I thought he had envisioned.”
“A short time later another client and friend came into my gallery and after gazing at the painting for a very long time he asked me to tell him about it. I had entitled the painting “The Burial” and it was about a young pioneer couple burying a child on the trail west. I had used my daughter, Whitnie, and her cousin, Mike, as models and had used period clothes and a wagon. Everything was historically accurate and a very good painting artistically. In terms of meaning, the painting depicts the difference in how men and women grieve. The young mother is lingering over the grave and the young father is leaving to find the team so they can move on. He is trying to deal with his grief by getting back to work.”
“When I looked at my client he was crying. He said that he would gladly purchase the painting if I would retitle it “The Journey.” He told me that this was his story. He and his wife had lost a child and many years later, she still grieved and lingered and he had tried to cope through his work. A journey for both of them, although different.”
“Through this experience I learned that it is not always possible to see what someone else sees in his or her mind. But it is crucial for me when I paint something that it speak to whomever purchases it. The painting can and should change, inspire, impact and even heal others. This is one of the best parts of being an artist. Not the singularity of the composition, but what the painting can convey.”
To purchase prints of this painting, click here.