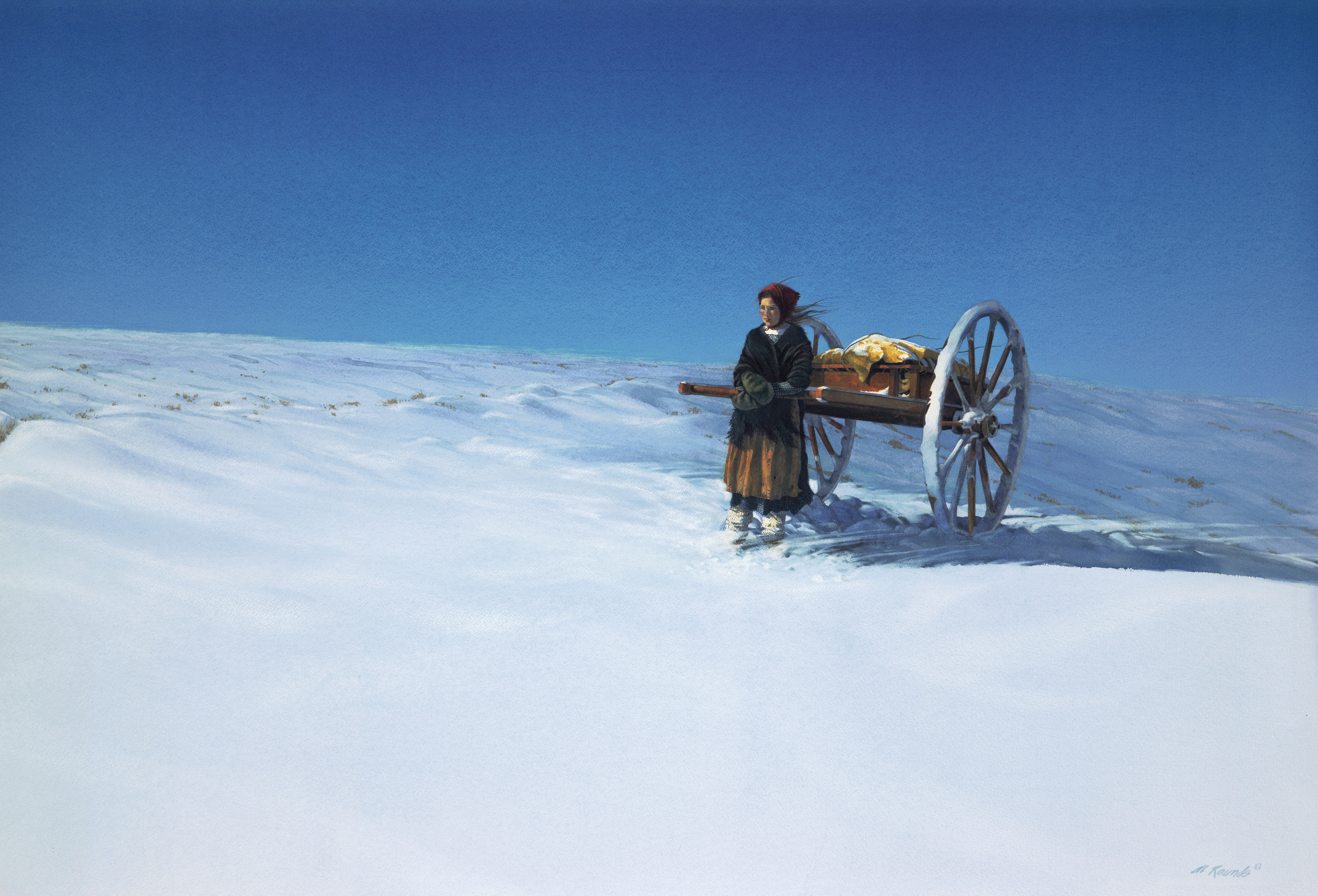 This is a painting of Mary Goble Pay and this whole thing started when Lee Groberg filmed the documentary of the William Martin Handcart Companies. He invited some artists to be up on location and I was thrilled to go up there because in Wyoming where everything took place and the time of year they had the proper attire. They had the right type of handcart that were historically built so everything was perfect for you to go up and be able to find something to paint. But the interesting thing that happened was that it was so cold you couldn’t do anything! It was about 50 below zero with the wind blowing like crazy. My camera wouldn’t work half the time because the battery was frozen. You couldn’t draw; you’d be so cold you’d be shaking. So all you could really do was observe.

After my first day of being up there on the set I came home later that night with this image in my head. I could see this young girl standing on a hill all by herself. I didn’t really know exactly too much about the painting yet. As I started to do my drawings and working through it all sorts of questions came into my mind about how big the figure should be and how  should she be standing? Should she be by herself? All these things I was trying to figure out in my drawings.

But I finally came to this particular piece because as I would draw out this person I’d hear this voice in my head say “Oh I would never stand like that” and I was just thinking I was talking to myself. I would draw it out in a different way and I would have her hands holding something. I think at first I didn’t have mittens on her and then I decided to put mittens on her. There were all sorts of things that whenever I went to draw something in particular this voice would come back inside my head and say “No, I would never do that. I would do this,” so I was following these feelings that I had to make sure that I had the right pose.

What I came up with is a young girl, she was Mary Goble Pay, she was 13-years old. She’s gotten to the top of a hill and she’s thinking “All I can do is get to the top of that hill and I can’t go one more step after I get there.” And now that’s she gotten to the top of the hill she’s looking out at another 100 miles of hills. So what’s the look on her face? I was trying to decide what look she should have. What look would a 13-year old have when they were faced with that kind of dilemma? I always like to say you ask a 13-year old to make their bed what’s the face you get? But Mary Goble Pay was not a normal 13-year old. I’ve posed her as looking out and seeing it and she’s willing to forward, but she’s not happy about it.

This is really symbolic of so many things in our own lives as we trudge through a very difficult situation and in order to keep moving forward we don’t have to be perfectly happy about it, but if we stay close to God through the process our steps are measured out carefully in front of us. And you’ll notice she has no footsteps in front of her. She has no path and direction, but she’s willing to move forward even though there’s no clear direction ready to move.